The Visual and the Verbal

New class crosses disciplines and teams artists and writers to collaborate on comics and prepare for Artspace show opening Jan. 24 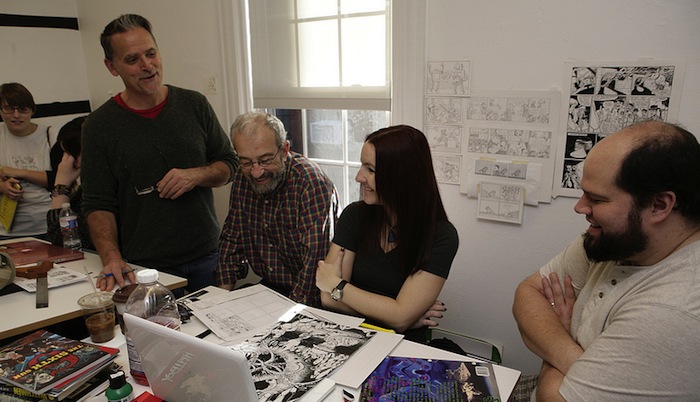 One of the biggest national names in comic arts has a new inspiration – the students at Virginia Commonwealth University. Stephen R. Bissette, an award-winning artist, writer, publisher and professor of comic arts, visited VCU Libraries in October to give a lecture on comics creation. An expert in the horror genre of comic arts, Bissette is best known for the DC comic Swamp Thing. But he retired from drawing comics in 1999 to focus on teaching at the Center for Cartoon Studies in Vermont.

His visit to VCU was at the invitation of a new class, Collaborating on Comics, and the class’s professor, Tom De Haven. Bissette was a great resource for the students, De Haven said. But it seems they weren’t the only ones learning.

“Bissette wrote me that he was so inspired by coming here that he started doing comics again,” De Haven said. After seeing the dedication and imagination of the students in De Haven’s class, it’s easy to see how a former artist could be inspired. Bissette was only one of the national experts to meet with De Haven’s students.

Collaborating on Comics is a Communication Arts and English class that brings writers and artists together to create together. Co-professors are Tom De Haven from English and Kelly Alder, School of the Arts. The capstone class project is an eight to 12-page comics presentation designed, produced and published by the students. This artwork will be on exhibit at ArtSpace Gallery in Richmond’s Manchester District, Jan. 24 – Feb. 23, 2014.

In addition, five short collaborative comics stories created by students in the class will soon be published in a comic book called Alloy, with an original cover by Kelly Alder and an introduction by Tom De Haven.

Why a collaborative class? Because comic arts is a much more complicated storytelling and artistic challenge than casual readers may realize.

“Graphic novels are usually collaborations,” explained Cindy Jackson, the archival assistant for comic arts at James Branch Cabell Library, the class’s primary contact in the library. “For example, in superhero comics you normally have a writer, a penciler, a colorer, an inker, a letterer and an editor. It’s a bit like writing a screenplay–the writer creates dialog and directions, and the artist creates the images.”

In the class, artists learn new techniques like inking and coloring, as well as specific concerns like how to render a story scene-by-scene and how to move the reader’s eye from frame to frame. Writers learn how to handle plot-art-dialog strategies, thumbnail breakdowns and visualizing scenes. Over the semester, each student practices the complex language of comics and learns to craft, revise, develop and finally produce a fully-realized work in a long-form.

The class seems like a natural for VCU. Richmond is full of comics creators, sellers, publishers and enthusiasts, and VCU Libraries has significant holdings, a nationally known 40-year-old collection of more than 100,000 materials—original and scholarly.

“A lot of students come in to read, but we also have a lot of students who are writing about comics,” said Jackson. “I do research consultations with doctoral candidates and we are getting more and more requests from outside researchers.” Studying comic arts, for instance, illuminates many cultural and historic themes and provides rich opportunities for research into stereotypes, diversity, language, propaganda, heroes, as well as historic and political events through editorial cartooning, satire or humor. The art of the comic strip or graphic novel is fodder for study by writers honing the craft of storytelling—whether the student is in English, broadcast journalism, theater or advertising.

De Haven, who teaches in VCU’s MFA program in creative writing, has long been interested in the graphic arts for both artistic and scholarly merit. A nationally known author, he wrote It’s Superman!, a novelization and re-imagining of the popular comic book hero. Other works include the Derby Dugan Trilogy, about American newspaper cartoonists in the 20th century.

De Haven said he has long felt that VCU needed a class on how to create comics, and this fall he was able to make it happen. He said one of the big benefits of the class for both the university and the students is that it brings multiple programs together.

In proposing the class, “I emphasized the cross-disciplinary – and really, cross-school – nature of the class,” De Haven said. The class is listed as both an English and a communication arts class, in order to give students experience with the collaborative process that many professional graphic artists use.

Kelly Alder, a Richmond artist and adjunct professor, said the class can also help boost the reputation of the school and bring its programs more in line with the comics collection.

“Other schools are teaching classes on creating comics, and so many students want to do them,” Alder said. “It seemed like an important opportunity.”

Jamie Leonard and Tom Mervenne are two of the students who have felt the impact of the class. Leonard is senior in the Communication Arts program and an aspiring comic artist. Mervenne is working on a Master of Fine Arts in Creative Writing and has a background in scriptwriting. While both of them were familiar with the process, they had never done something quite like this.

“I knew some of the things she had drawn, so I tailored a story that would be good for her art,” Mervenne said. “It’s a supernatural noir urban fantasy, about a private eye who works with fairytale characters.”

The team has gotten lots of inspiration from comics, naturally, but said they have also found ideas in other sources as well.

“I actually looked at ‘American Pickers’ and some hoarding shows for inspiration,” said Leonard about a scene showing a cluttered garage. Mervenne also laughingly referred to the hoarding tendencies of dragons in The Hobbit.

The class has provided the students with diverse learning opportunities throughout the semester. Students visited the Small Press Expo, an alternative comics festival in Bethesda, Md., and De Haven and  Alder arranged for guest speakers from all parts of the comic-creating process, including VCU alumni and artist Chris Visions and local publisher Chris Pitzer.  De Haven said VCU Libraries has been an asset, helping sponsor the lectures and class visits of nationally-acclaimed comic artists like Bissette and James Sturm, opportunities the students would not have gotten otherwise. “They’ve been remarkably supportive and a great resource,” he said.