Another Best Year Ever for Events 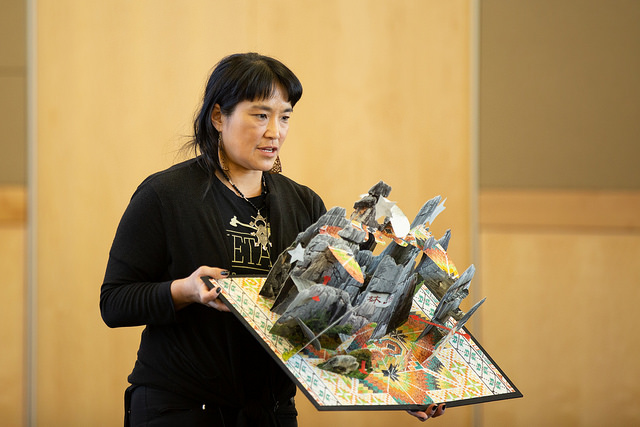 With one month still left in the 2017–18 fiscal year, VCU Libraries has already hosted 352 events, nearly 100 more than in 2016–17, making this our busiest and most productive year ever for events.

105 of these events were library organized or sponsored, from annual functions such as our Friends of VCU Libraries Book Sale and our Black History Month Lecture to an employee-focused celebration of our receiving the 2018 Association of College and Research Libraries Excellence in Academic Libraries Award. The remaining 247 events were organized by units or groups from both VCU campuses and included lectures, conferences, graduations, donor receptions, organizational meetings and employee development sessions.

These events attracted more than 23,000 attendees, not including the many who dropped by our buildings for exhibits, installations and performances in public spaces

There is more demand than ever for events at VCU, and the libraries are seen as necessary partners and instigators in ongoing conversations about history and social justice; race, sex, gender and sexuality; technology, science and medicine; and art and literature.

Gender Revolution
Sept. 6, 2017
Screened in Cabell Library as part of the annual Southern Film Festival, this documentary, hosted by Katie Couric, aims to promote understanding and tolerance of gender fluidity. At the event, transgender student and Virginia native, Gavin Grimm, who sued the Gloucester County School Board for being barred from using men’s restrooms in school, discussed his experience combating gender prejudice and inequity.
VCU News Story About the Southern Film Festival | Commonwealth Times Story About the Event

VCU Cabell First Novelist Award Night
Nov. 16, 2017
Named for influential and controversial novelist and Richmond native James Branch Cabell, the VCU Cabell First Novelist Award annually recognizes a debut novel for its excellence and creativity. This year, Jade Chang came to campus to read from her winning work, The Wangs Vs. the World, the story of an Asian immigrant family that comes to grips with its identity. She was joined by her agent and editor for a discussion intended to help demystify the publication process for aspiring writers.
VCU News Story

The Life and Work of Richard Carlyon
Feb. 8, 2018
VCU Libraries and the VCU Institute for Contemporary Art celebrated respected artist, Richmond Professional Institute alumnus and VCU faculty member Richard Carlyon with a special one-day-only hands-on display and reception featuring some of his experiments in video and xerography book-making. In attendance were members of his family and many of his friends and colleagues. The event was held in conjunction with a retrospective exhibit at the Reynolds Gallery.
Photos

Black History Month Lecture: Stamped from the Beginning
Feb. 15, 2018
At the 16th installment of our Black History Month Lecture series, National Book Award–winning author Ibram X. Kendi, Ph.D., argued that racism originated not in ignorance and hatred, but in the economic, social and political self-interest of those in power. The solution, he said, was therefore not to educate, but to change policies. The event, always one of our most popular, attracted a large crowd of students, teachers and community members.
VCU News Story About Black History Month at VCU | RVA Magazine Story About the Event | Commonwealth Times Story About the Event | Photos

Sanger Series Lecture: On the Centenary of the 1918 Flu: Remembering the Past and Planning for the Future
Feb. 19, 2018
To commemorate the 1918 flu pandemic, the 2018 Sanger Series focuses on the deadly outbreak, why it happened and the lessons that we can learn from it. In the first of these events, collectively titled Going Viral, Jeffery Taubenberger, VCU alumnus and chief of the Viral Pathogenesis and Evolution Section, Laboratory of Infectious Diseases, National Institute of Allergy and Infectious Diseases, National Institutes of Health, considered the impact of the pandemic on the course of medical history.
VCU News Story

We celebrated the acquisition of our 3 millionth volume with a trilogy of events highlighting the 2,999,999th volume, the 3 millionth and the 3,000,001st: an oral history collection featuring second-wave feminists in central Virginia, a seminal new book about treatment of traumatic brain injury and an artists’ book by a VCU alumna. Each volume was chosen as a representation of the sophistication and depth of the VCU Libraries collections.
VCU News Story | Photos

The Future of Transgender and Non-binary People
March 28, 2018
This panel of four activists explored how government policies, such as health care policies, affected transgender and non-binary people. Organizer Peter Jenkins, a doctoral student in the VCU L. Douglas Wilder School of Government and Public Affairs, intended the event to serve as the start to a discussion that could lead to change. VCU Libraries provided, in addition to organizational support and a venue, a pop-up library featuring ready-for-checkout materials about gender identity and politics.
VCU News Story

Levis Reading Prize Night
March 29, 2018
Given in memory of poet Larry Levis, who taught at VCU until his untimely death, the Levis Reading Prize annually honors a poet for the best first or second collection of poems, as chosen by the faculty of the MFA in Creative Writing Program at VCU. Marking the 20th anniversary of the prize, Solmaz Sharif read from her winning collection, Look, filled with poems taking to task the government, the military and the media for attempting to whitewash inhumanity with euphemism and censorship.
VCU News Story | Levis Remembered Suite in Blackbird | Photos

Brown-Lyons Lecture: Lincoln and the Jews
April 11, 2018
Jonathan D. Sarna, Ph.D., university professor, Joseph H. & Belle R. Braun professor of American Jewish history and chair of the Hornstein Jewish Professional Leadership Program at Brandeis University, reflected on one of the most beloved figures in American history and his complex relationship with Judaism. This standing-room-only event was the 33rd installment in the Brown-Lyons Lecture series, which for many years was given by popular local speaker Jack D. Spiro, D.H.L., Ed.D.
VCU News Story | Photos

Reception and Celebration Recognizing VCU Libraries as a 2018 Recipient of the Association of College and Research Libraries (ACRL) Excellence in Academic Libraries Award
April 27, 2018
This prestigious award in the library field recognizes VCU Libraries for its contributions to the university and wider community. At the event, university librarian John E. Ulmschneider, on behalf of VCU Libraries, formally accepted the award from ACRL president Cheryl A. Middleton and thanked the library staff for their work, which made the award possible. Other librarians and library supporters from around the Richmond area joined in the celebration.
VCU Libraries News Story | Photos