Local comics creators will share their work this weekend at the first Richmond Indie Comic Expo at Virginia Commonwealth University.

A group of VCU School of the Arts students who are passionate about comics and graphic novels, led by Thea Cheuk and Liz McCown, are hosting the expo, which takes place Sunday, Nov. 17, from 11 a.m. to 5 p.m. at James Branch Cabell Library. The event is free and open to the public and will feature 80 local artists, including alumni and professors.

Bizhan Khodabandeh, an assistant professor of advertising in the Richard T. Robertson School of Media and Culture, and Kelly Alder, who teaches at VCUarts, have long wanted to hold such an event, but it took their students to bring the vision to fruition.

“[Alder] wanted to create an event that would bring together the comic community in Richmond,” added McCown.

Comic books can mean many things to many people, a point that excites Cheuk.

“I was interested in the event as a way to explore a totally different side of what comics can be, in contrast to my interest — academic and personal — in mainstream superhero comics,” they said. “I'd also recently gone to NOICE, an indie comic and zine fest in Norfolk, Virginia, and really loved the atmosphere and community of that event, so I wanted to try and bring that sort of energy to an event at VCU.

“Additionally, indie comics and zines are a popular medium with marginalized artists — queer artists, artists of color, disabled artists, all of the above — and VCU's student population is so diverse and rich that I wanted to try and tap into that, and create a space to celebrate and recognize creators who are normally sidelined in mainstream comics and the general art community.” 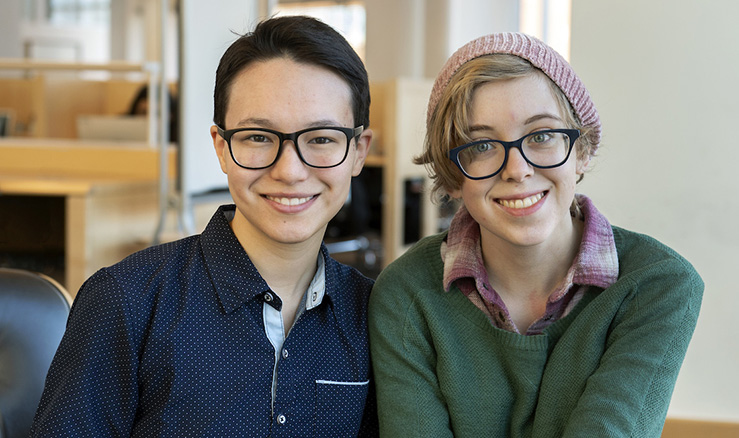 Khodabandeh and Alder have been behind the students, advising them during the planning process, and are excited to see the progress they have made. They hope this can become an annual event.

VCU has a strong history in comic books and graphic novels, possessing one of the largest collections on the East Coast.

“If the special collection had been here when I went to VCU, I would have lived there. I mean, I just never would have left,” Alder said.

For Cheuk, comic books have been a way of life since high school, when they were introduced to Dick Grayson’s Nightwing. At VCU, Cheuk, a student in the Honors College who also is studying gender, sexuality and women's studies in the College of Humanities and Sciences, wrote a research paper on Grayson under the mentorship of Chris Irving, a communication arts professor. That paper, which Cheuk presented at VCU’s spring 2019 undergraduate research poster symposium, led to a coveted internship with DC Comics last summer.

“[It] sparked my professional interest in the comics industry,” Cheuk said.

McCown, meanwhile, first started reading comics around the age of 9.

“My parents gave me an ‘Archie Comics Digest’ that they had gotten at a gas station,” she said. “I read it so many times that it’s completely fallen apart.” 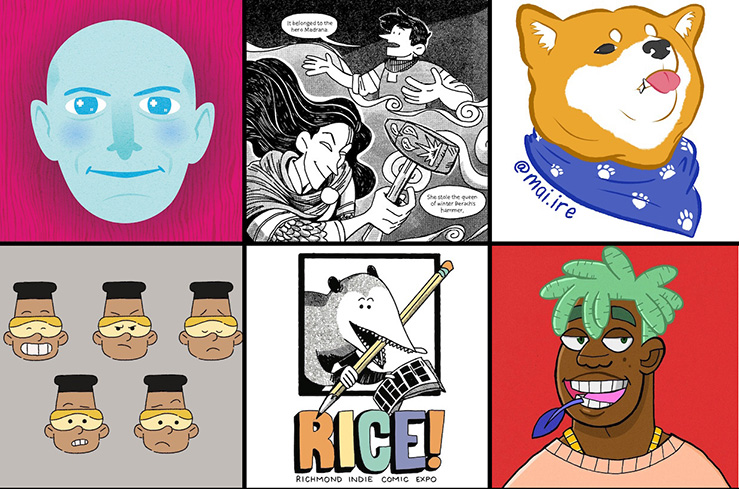 Everyone from the avid comic book collector to the novice will find something interesting at the expo. Khodabandeh said one of the biggest reasons to attend the expo is to see and meet the people who are making the art, something that is not as easy to do at larger expos, such as GalaxyCon.

“You are actually meeting the people making the comics,” he said. “And the comics are their own characters, their own stories they are telling. It’s not them drawing a picture of Wolverine because they like Wolverine. It’s ‘here’s my character that I developed myself, and I have printed myself and I am going to get to sign it and talk to you about it.’”

While both Cheuk and McCown have made their own comic books, neither will sell their work at the expo.

“I have made a four-page comic for the VCU student organization Emanata, … which publishes an anthology of student comics each year,” Cheuk said. “But coming off my internship experience at DC, I have a more ambitious comic in the works that hopefully I'll be able to get started on next semester in Kelly's comics class. During [the expo] I will be acting in more of a supervisory position, so I will not be selling any comics.”

Additionally, McCown has had some of her work published while at VCU.

“I’ve been making short comics for years. Two of them have been published in Emanata,” she said. “One is a 32-page comic called “Let’s Have a Baby” that’s about gay werewolves having kids. I made that one in [Alder’s] class last year.”

Cheuk and McCown are serving as co-presidents of the expo team, and are excited about the new skills they have learned from organizing the event.

“This has been really great for soft skills. We get a lot of technical skills in [VCUarts],” Cheuk said. “This is a practical application of how do you get [your whole team] in the same room at the same time? How do you make sure your space is where you need it to be? How do you make sure people are going to be able to park? We have tried to work to make sure this is an accessible event, that this is an event for the community as well as VCU. I think that is a useful experience.”

McCown agrees that the skills learned while organizing the expo will follow her throughout her career.

“I wanted to do this event to get experience with running conventions. I’ve always loved attending comic conventions,” McCown said. “I was curious about how they were run. I’ve had some experience with event planning, but nowhere near to this extent.”

In addition to artwork and comics for sale, the expo will feature academic panels on topics such as creating comics and launching Kickstarter campaigns. Velocity Comics, the VCU Department of Communication Arts and Cabell Library are sponsoring the event.