Pulitzer-Prize winning historian Annette Gordon-Reed’s 2021 book “On Juneteenth” weaves together American history, family chronicle and memoir to tell the story of Juneteenth, which celebrates the end of slavery in the U.S., and specifically the day slavery ended in Texas – June 19, 1865. Throughout the book, she said, is the message that the U.S. is on a journey to live up to its founding ideals, and that all Americans have a part to play.

“The country’s on a journey to try to realize the ideals expressed in the Declaration of Independence. And the book really shows one family’s and one society’s part in that journey. I know that as a historian, I’m not supposed to believe that there’s inevitable progress. That things are going to get better and better and better. That’s what Jefferson believed,” Gordon-Reed said. “But the takeaway is that we each have a role to play to try to fulfill that promise.”

Gordon-Reed, the first African American recipient of the Pulitzer Prize for History and one of the most authoritative voices on race and history in America, spoke at James Branch Cabell Library at Virginia Commonwealth University on Thursday for VCU Libraries‘ 21st annual Black History Month Lecture.

Her talk was based on “On Juneteenth,” which was released last May, a little more than a month before Juneteenth was made a federal holiday.

The less-told story of Texas

Gordon-Reed, a professor of history in the Faculty of Arts and Sciences at Harvard University and the Carl M. Loeb University Professor at Harvard Law School, is herself a descendant of enslaved people brought to Texas as early as the 1820s.

In writing the book, she said she wanted in part to tell a more complete history of Texas. Traditionally, narratives of the state’s past have emphasized cattle, oil and gunslingers, while ignoring the East Texas plantations that relied on enslaved labor, including her ancestors who, she said, “were brought over as enslaved people with whites who came to Texas in order to extend the cotton empire into that region.”

“Slavery helped to create and maintain the racial hierarchy in Texas and all throughout the South,” she said. “So if I told my family story, I would be telling that story.”

Gordon-Reed noted that Galveston was the site of Union Army General Gordon Granger’s proclamation ordering the freedom of more than 250,000 enslaved people in Texas, marking the end of the military effort to maintain the institution of slavery. Around a hundred years later in Conroe, Texas, Gordon-Reed was the first Black child to attend her elementary school.

“I was a version of Ruby Bridges for my hometown. I integrated our schools when I was 6 years old. My town, as a number of communities across the South were doing, was resisting Brown v. Board of Education. This is 10 years after Brown. And they were coming up with all kinds of plans to avoid desegregation. One of them was something called a freedom of choice plan, and in a freedom of choice plan, white parents were supposed to pick white schools and Black parents would pick Black schools. My parents decided not to go along with that. And they picked a white school to send me to.”

It was the mid-1960s, and her parents saw sending Gordon-Reed to the elementary school as their contribution to the civil rights movement. 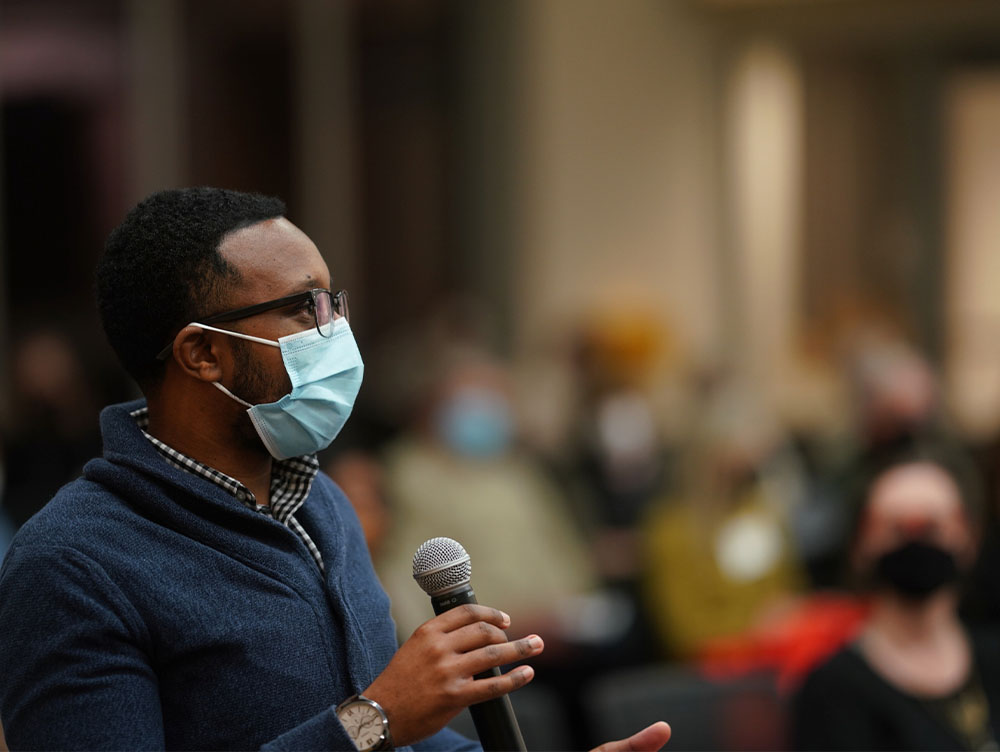 “This was the time when there was the Civil Rights Act of ‘64, the Voting Rights Act,” she said. “People were marching. Things seemed to be on the move. Black people … and their supporters saw themselves as being on the move. Sending me to this school was an example of that.”

She described how her white teacher and some of the children were kind, while others were not, and how school administrators stopped by to witness the “spectacle” of a Black student in the school.

“It gave me a sense very early on of the importance of history, because I knew that what I was doing was tied to something that was bigger than just our family,” she said.

Her story and her family’s story, she said, are part of the more complete, honest story of Texas and the United States that she wanted “On Juneteenth” to inform.

An occasionally forgotten part of Granger’s proclamation, she said, was that it promised “an absolute equality of personal rights and rights of property between former masters and slaves.”

“To think that … more than a hundred years later, I would be part of a vanguard, a part of the effort to make that come true, is very humbling to me,” she said.

An honest telling of history

In her talk at VCU, Gordon-Reed addressed recent efforts across the country to ban books and certain topics in schools, particularly those dealing with America’s history of racial injustice. She said schoolchildren are taught about the Alamo, but often aren’t taught that some of the men, such as William B. Travis and Davy Crockett, were slaveholders and that a key reason behind the conflict was that Mexico had outlawed slavery.

“You should be able to face [America’s history of racial injustice] without hiding from it. This is not a matter of just making people feel bad. It’s telling people the truth so that they can understand why the society is as it is, why we have the hierarchy that we have in Texas, the racial hierarchy. And this is a complicated subject, but I’ve found that kids are really smart. Kids, if you talk to them the right way, give them the right guidance, they can understand this [history].”

During the Q&A, Gordon-Reed was asked what she thought of reparations for slavery. She said that she sees reparations as morally right, but also incendiary. In her view, she said, the best strategy would be to start with finding Black people who are alive today who had property taken, who were refused opportunities and other harms, and filing lawsuits.

“There are people who are alive today who could be plaintiffs, who have had injuries that should be redressed,” she said. “The federal government participated in steering Blacks away from neighborhoods where the schools would’ve been better, where their lives would’ve been better materially and educationally. I would start with that and then maybe work your way back to slavery.”

In addition to “On Juneteenth,” Gordon-Reed is the author of six additional books, including “The Hemingses of Monticello: An American Family,” which was awarded the Pulitzer Prize in History in 2009 and the National Book Award for Nonfiction in 2008, and “Thomas Jefferson and Sally Hemings: An American Controversy,” an examination of scholarly writing on the relationship between Jefferson and Hemings that exposes the possibility that scholars were misguided by their own biases and may even have contorted evidence to preserve their preexisting opinions of Jefferson. Her upcoming book, “A Jefferson Reader on Race,” is slated to be published this year.

Gordon-Reed’s honors include the National Humanities Medal, awarded by President Barack Obama; a Guggenheim Foundation fellowship; and a MacArthur Foundation fellowship. She also was elected a fellow of the American Academy of Arts and Sciences and is a member of the academy’s Commission on the Humanities and Social Sciences. In 2019, she was elected a member of the American Philosophical Society.

Her lecture was the 21st Black History Month Lecture organized by VCU Libraries. Last year’s event featured Marcia Chatelain, Ph.D., author of “Franchise: The Golden Arches in Black America,” which tells the story of how fast food became one of the greatest generators of Black wealth in America. That book received the 2021 Pulitzer Prize in History.