The pantries — which are similar to the Little Free Libraries found in neighborhoods, but stocked with free nonperishable food items and toiletries — have been installed in the School of Business’ Snead Hall and the College of Engineering’s Engineering Research Building on the Monroe Park Campus and in the Larrick Student Center, the Health Sciences Library and the Gateway Building on the MCV Campus. An additional Little Ram Pantry will also be deployed soon in the James W. and Frances G. McGlothlin Medical Education Center.

“Our overall objective is to test the potential of our pilot program to mitigate food insecurity for VCU students,” said John C. Jones, Ph.D., an assistant professor in the Center for Environmental Studies, who is leading the project.

Jones was awarded a VCU community-engaged research Health Equity Grant to launch the project, in partnership with the Office of Community-Engaged Research, the Office of Service-Learning, VCU Life Sciences, Ram Pantry and the Division of Student Affairs. The project is part of the Sustainable Food Access core, one of eight transdisciplinary cores within VCU’s Institute for Inclusion, Inquiry, and Innovation, or iCubed.

In addition to Jones, the research team also includes Youngmi Kim, Ph.D., an associate professor in the VCU School of Social Work; Maghboobah Mosavel, Ph.D., an associate professor in the Department of Health Behavior and Policy in the School of Medicine; Leland “Bert” Waters, Ph.D., associate director of the Virginia Geriatric Education Center’s Geriatrics Workforce Enhancement Program; and Lauren Linkous, a doctoral student in the College of Engineering.

The Little Ram Pantry project is research focused, in that the team is studying its effectiveness in addressing student hunger. If it proves successful, the team hopes that it will transition to be overseen by VCU staff, rather than research faculty, on an ongoing basis. And, Jones said, it could be replicated at other schools as well. 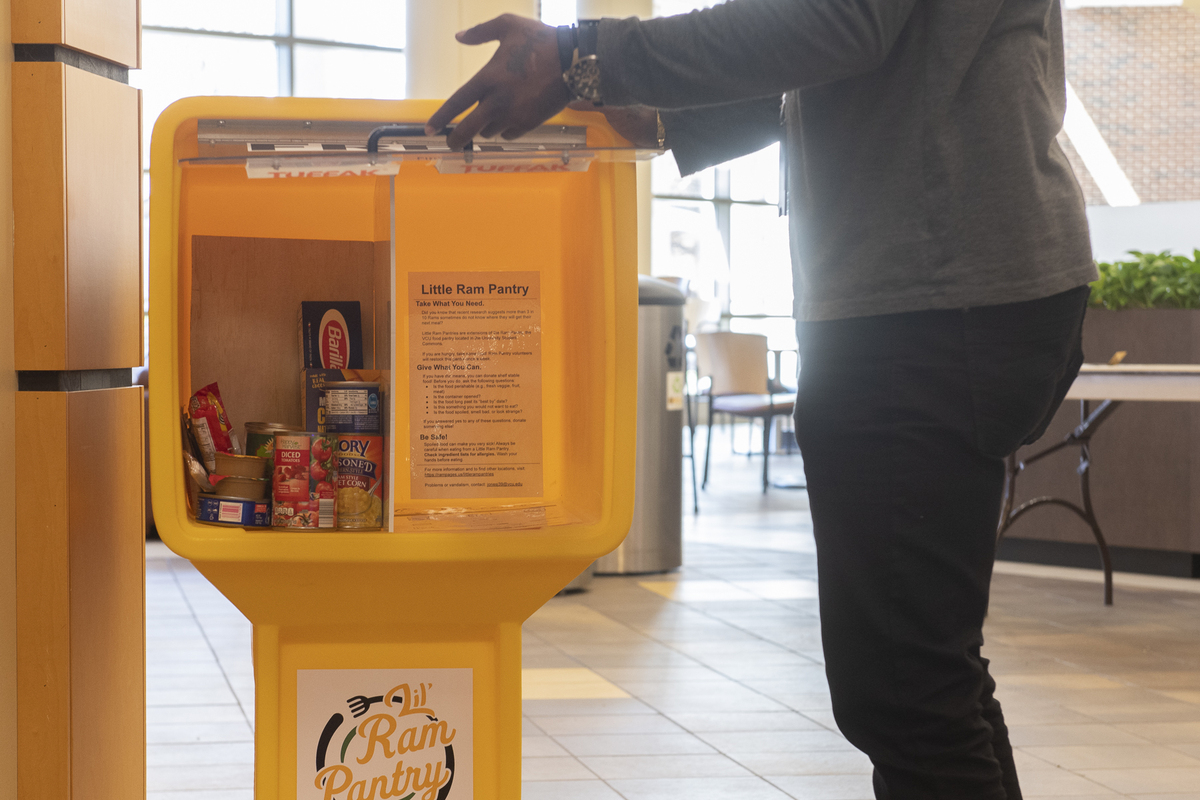 “If we determine our program to be efficacious, then we hope to expand this model to other universities across the country,” he said.

The researchers have been able to gather data on usage of the Little Ram Pantries thanks to a magnetic sensor system designed by Linkous, along with several undergraduate students, that generates time-stamp data every time the pantry’s door is opened. The data collection is 100% anonymous.

While the data collection so far has encountered a few challenges — such as malfunctioning electrical outlets, difficulty connecting to Wi-Fi, and supply chain delays for parts — the early results look promising, Jones said.

Since the initial Little Ram Pantries were installed in early October, people “interacted” with the boxes more than 900 times, equating to roughly 75 times per week. Given the occasional technical hiccup, however, that number is likely to be higher. However, Jones said, even with this moderate success, the problem of food insecurity among the VCU population is very real. Recent research from team members Kim and Waters found that roughly 35% of all VCU students suffer from food insecurity on some level.

Jones cautioned that even if the Little Ram Pantries are successful, food insecurity will always be a problem on college campuses until fundamental changes occur at the national level to erode the systemic causes of food insecurity.

For those interested in supporting the project and Ram Pantry’s efforts to address student food insecurity, please visit https://www.support.vcu.edu/give/rampantry. Additionally, people interested in donating food can add nonperishable, shelf-stable products into the Little Ram Pantries. Signage at each of the Little Ram Pantries gives more instructions about how to do this safely. People interested in donating produce or other perishable items can do so at the main Ram Pantry in the University Student Commons on the Monroe Park Campus.

Additionally, the research team is seeking students who use the Little Ram Pantries to participate in VCU Institutional Review Board-approved research about the program.

Interested students may participate by taking an anonymous survey, at https://littlerampantries.questionpro.com/, which should take roughly 15 minutes to complete. Participants can be entered into a raffle to win $25.

Participation is voluntary, participants can withdraw at any time, and participant identities and responses will be anonymous and confidential.

The team is also looking for more student volunteers to assist with the weekly distribution of food and data collection. Interested students should contact Reyna Vazquez-Miller, the student volunteer coordinator, at vazquezmr@vcu.edu.

For more information or to make suggestions about the project, contact Jones at jonesj39@vcu.edu.

“The project is constantly evolving as more people in the VCU community contribute ideas, resources and their time,” he said. “This project is truly a community effort.”

This article was first published by VCU News.