A new exhibition at James Branch Cabell Library gives the Richmond community the opportunity to take down one wall to the Middle East: the language barrier.

"Breaking Barriers: Arabic Poems for English Readers," a selection of poetry books from VCUQatar Libraries, is on view in Special Collections and Archives, Fourth Floor, James Branch Cabell Library through May 10.

Arabic is a rich and beautiful language with a longstanding tradition of poetry. In order to capture the essence of Arabic verses for a wider audience, this collaborative exhibit among VCU Libraries in Richmond, VCUQatar Libraries in Doha and the Poetry Foundation Library in Chicago presents a collection of Arabic poetry books for English readers. 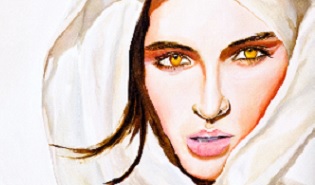 The materials from VCUQatar Libraries showcase a diverse sampling of poems from medieval Islamic Spain to the modern Arabian Gulf. The genesis of the display was the tied to publication of the first anthology of modern and contemporary poetry of the so-called Gulf region.

That book grew from a need expressed by Qatar students for a book that featured poets of their region and language. The translators and editors focused on the Arabian Gulf countries of Bahrain, Kuwait, Oman, Qatar, Saudi Arabia and the United Arab Emirates. Edited by Patty Paine and Samia Touati of VCUQatar, and by Jeff Lodge, who taught at Qatar and now is in Richmond at VCU's University College, "Gathering the Tide: An Anthology of Contemporary Arabian Gulf Poetry" offers 200 poems by some 50 poets. Noted VCU poet David Wojahn wrote the introduction. The 2011 book inspired the current exhibition.

"Students everywhere are limited in their exposure to poetry," said Carol Hansen, director of libraries at Virginia Commonwealth University's School of the Arts in Qatar.

"When they are exposed, it is often to poetry from the United States and the United Kingdom. The Arab countries have a long tradition of poetry and we felt library users may be interested in widening their exposure to Arabic poetry in translation. A recent cultural phenomena in the Gulf is the highly successful television show called "The Million's Poet" which is similar to "American Idol" but focuses on oral recitation of Gulf poetry instead of pop songs. The show, produced in Abu Dhabi,  draws millions of viewers. ... We hope viewers of this collection might further their interest in the Arab world, and in poetry from the region."

Cabell Library's display is arranged geographically among Spain and the Mediterranean, Northern Arabia and the Arabian Gulf countries. The books are arranged geographically because Arabic is not a monolithic language. Different dialects are spoken between North Africa and the Arabian Peninsula. Regional histories and culture shape themes that appear in the literary arts. Romance stirs passion in Moorish sonnets while politics dominate Iraqi odes.

One display case is devoted to Arab women poets. Women from all the major Arabic-speaking countries have been composing poems for as long as men but have not received ample recognition. Curator for the Richmond display is Leila Prasertwaitaya, library specialist for the arts who managed all aspects of the exhibition.

Says curator Prasertwaitaya: "Many people may feel intimidated by the Arabic language, but these books from VCUQatar Libraries allow English readers to have access to a rich and longstanding tradition of poetry. The mainstream media has a tendency to emphasize only the violent and negative aspects of Arab countries, which paints a one-sided perspective.

"I'm hoping readers will be able to connect with the poems that they read and see that people in the Middle East are human just like everyone else with similar emotions and problems. Poetry transcends language because it is about finding the common humanity in all of us."