2018-19 another record year for events at VCU Libraries

Every year VCU Libraries manages somehow to break its previous event records. This year, 2018–19, the libraries hosted 594 events with a combined attendance of approximately 32,000. That’s an increase of 208 events and 6,970 attendees from the year before.

What accounts for this huge increase? In part, it’s simply that, at this point, the library events staff could set up any of the library event spaces in their sleep. They’re more experienced with events and therefore able to accommodate a greater number than before.

Cabell Library has become a favorite spot for small meetings. Every day, it hosts multiple groups. And many non-library organizers have become thoughtful, proficient users of the rooms in the building, so they can be trusted them to use resources with minimal supervision.

The story of the libraries’ events growth is, in other words, much the same as the story of the growth of the buildings and collections: it’s about collaboration, about working creatively with others to offer more than could be offered by the libraries alone.

Thanks to the wonderful university colleagues who made this a great year for events.

10 highlights from the lineup of library-organized and -sponsored events

THATCamp (The Humanities and Technology Camp) is an international ongoing series of “unconferences,” informal gatherings where scholars and practitioners at all levels in the humanities and technology fields share their recent projects, align their interests with others and embark upon innovative new endeavors. The New Souths sessions are specifically intended to explore and unpack different perspectives on the highly divisive entity that is the American South. This year’s installment was particularly strong in community- and activist-focused research questions and digital projects, and a number of attendees made connections that continue to bear fruit beyond the event. 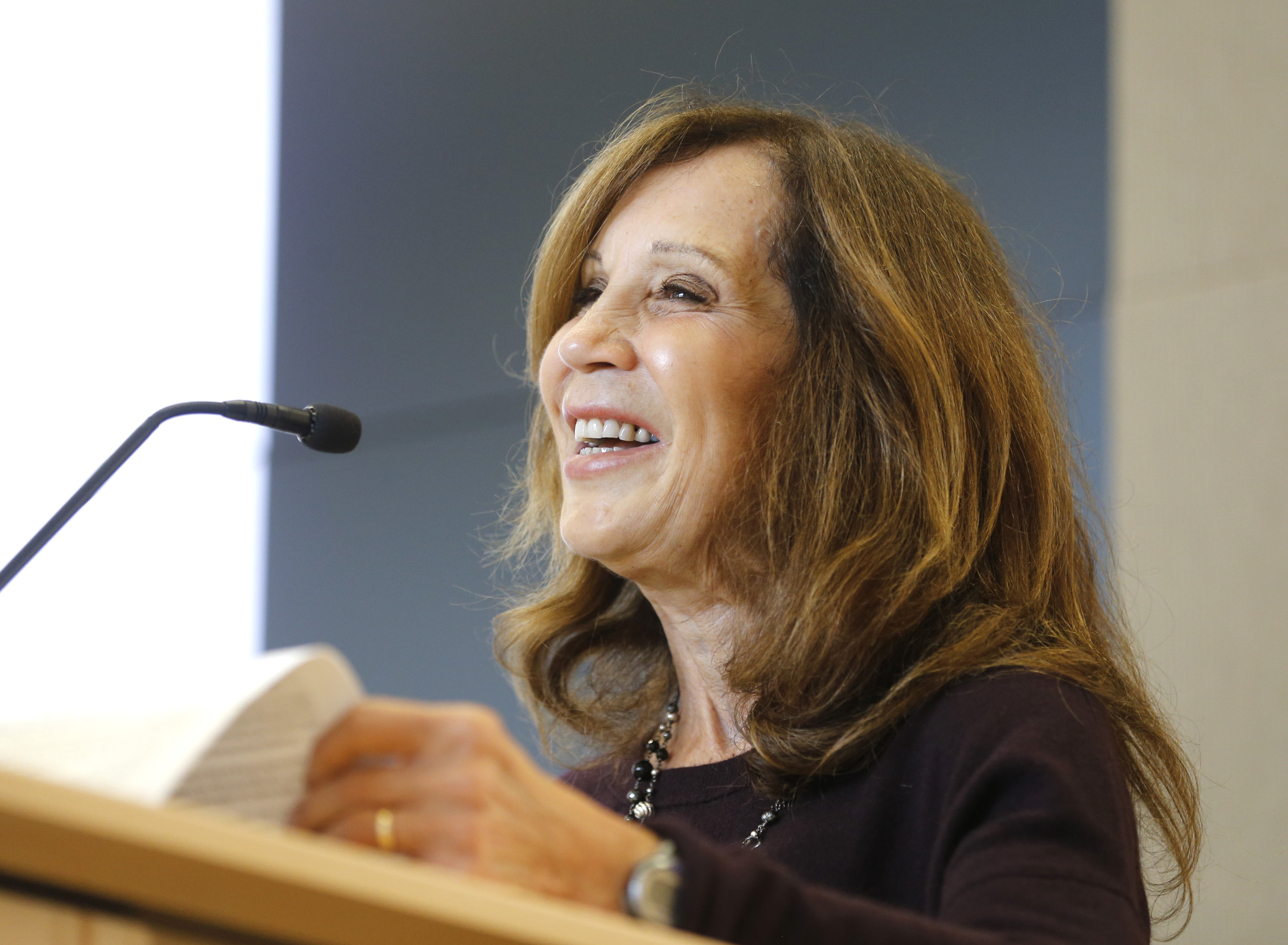 Gina Kolata, New York Times science writer and author of the book Flu: The Story of the Great Influenza Pandemic of 1918 and the Search for the Virus That Caused It, narrated the lengths that contemporary scientists went to to unearth remnants of the deadly pandemic in the bodies of victims in the attempt to understand where it came from, how it infected so many so quickly and why it was so destructive. The VCU health sciences community and others from around Richmond were captivated by this real-life medical “murder mystery,” as Kolata termed it. 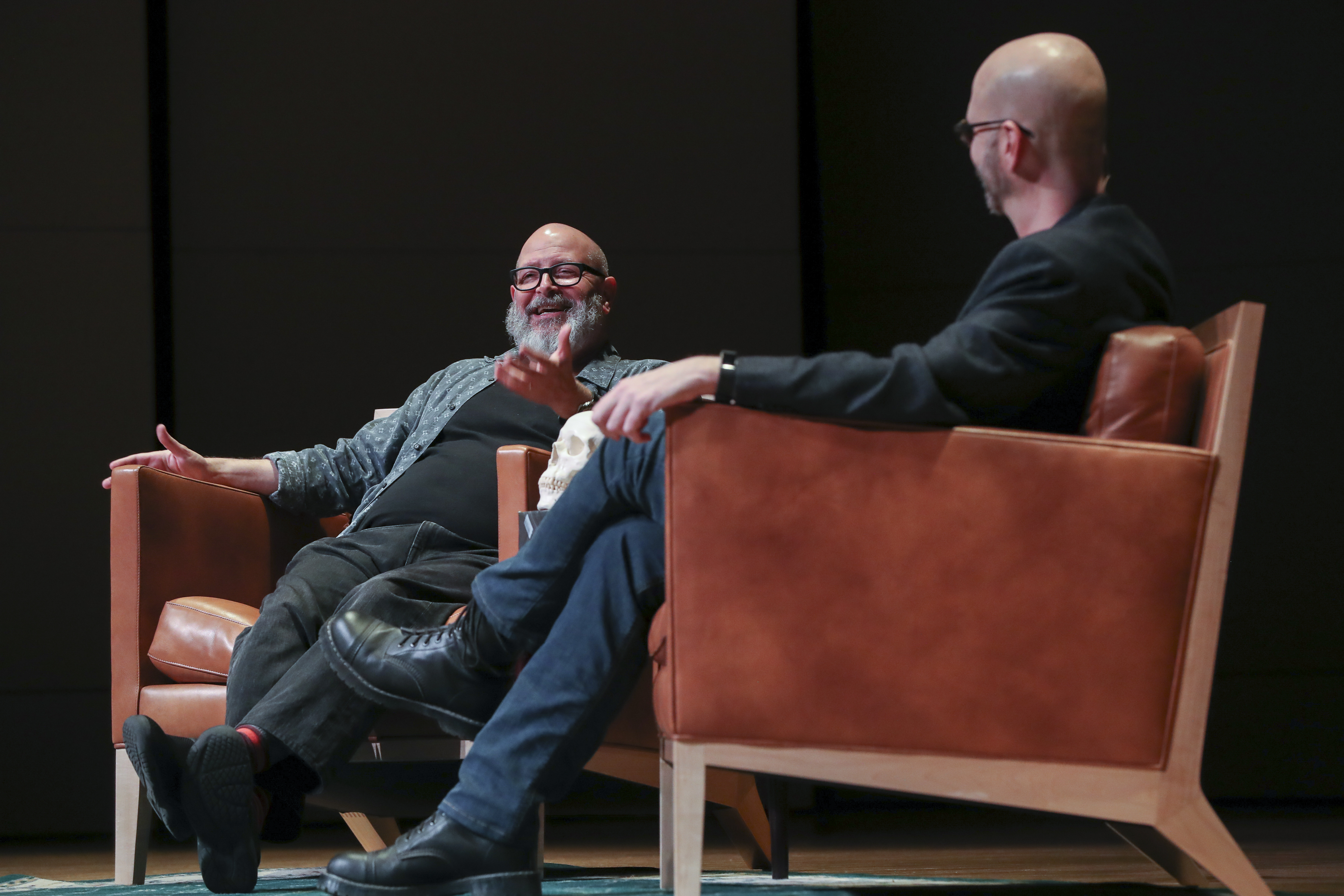 Master of the Hellboy Universe: A Conversation with Mike Mignola
October 29, 2018

In collaboration with the VCUarts Department of Communication Arts, VCU Libraries brought Mike Mignola, creator of the popular multimedia Hellboy franchise, to the university for a conversation with his friend and collaborator TyRuben Ellingson. And while the conversation did touch upon the success of Hellboy and excitement over the then-upcoming movie, at its heart it was a down-to-earth reflection on work ethic, creating what you love and not being afraid to share it. Students and other creators interested in entering the comics field had a lot to take away.

Originated by ESRI (Environmental Systems Research Institute), GIS Day is held annually around the world to help teach people about the many uses of GIS technology. This year was VCU’s inaugural event. People from across the university and central Richmond shared their work and expertise in lightning talks and a panel on GIS-related careers and at a technology “petting zoo.” The event will return November 13, 2019.

As part of a growing initiative to better serve advanced graduate students, VCU Libraries piloted a writing marathon for graduate students working on their culminating projects. It was a cold Monday, but as extra incentive for them to leave the house and come to Cabell Library, students were provided with the warm and spacious lecture hall, coffee and snacks, and on-site research librarians and consultants from the VCU Writing Center. Approximately 45 from a variety of disciplines attended and said that they were glad to be surrounded by their peers and inspired to make headway on their writing.

Following up on a successful first year in 2018, the 2019 OpenCon Virginia brought together 130 faculty, librarians, researchers and students from across the state for a day-long event around the subjects of open-access publishing, open data and open education. In addition to a full schedule of lightning talks, panel discussions and workshops, the opening and closing sessions invited conference participants to explore individual and collective ways to create more open systems of research and education. The leaders of the IMLS (Institute of Museum and Library Services)-funded OA in the Open project led a discussion about the meaning and role of collective action in open-access collection development. VIVA (Virtual Library of Virginia) led a brainstorming session on ways to build statewide collaborations for open and affordable education. And the DORA (Declaration on Research Assessment) community manager led the conference in an activity to imagine how people might better value the contributions researchers make to their disciplines outside of traditional measures like journal prestige. OpenCon Virginia will return for a third year in 2020. 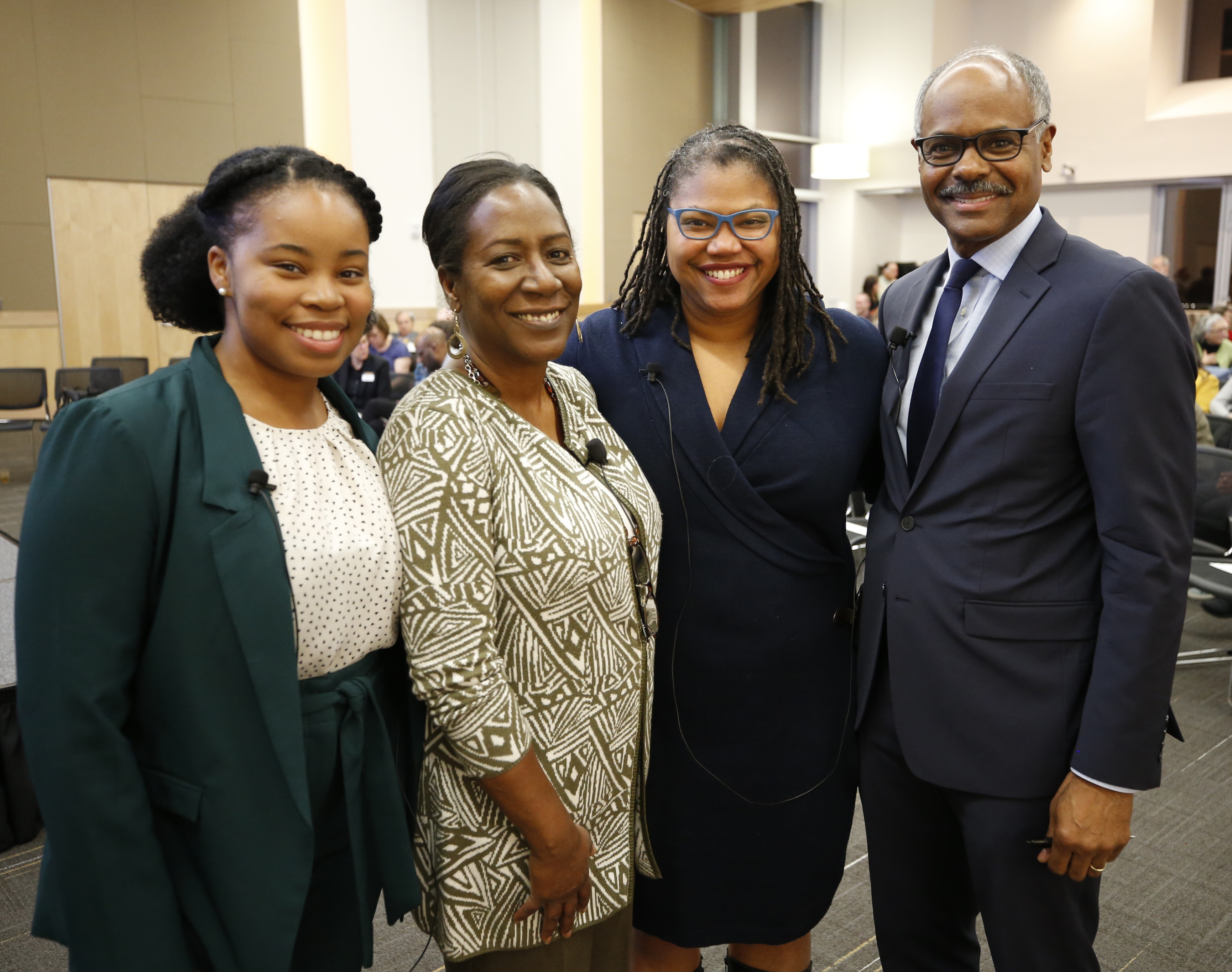 Emmy Award–winning television director and VCU alum Jeffrey Blount moderated a discussion of the treatment of African-American veterans following their return home from wars. Christy Coleman, director of the American Civil War Museum; Kiara Boone, deputy director of community education with the Equal Justice Initiative; and Adriane Lentz-Smith, Ph.D, associate professor of African and African-American studies and women's studies at Duke University and author of the book Freedom Struggles: African-Americans and World War I, painted a moving picture of the violence and injustice African-American veterans faced in the late 19th and early 20th centuries, including lynching and unequal access to financial support. Blount returns to VCU Sept. 18 for a talk about his latest novel.

Rabbi Jill Jacobs, executive director of T’ruah: The Rabbinic Call for Human Rights and author of Where Justice Dwells: A Hands-On Guide to Doing Social Justice in Your Jewish Community, outlined the scriptural basis for social justice initiatives in and led by the Jewish community and shared some of the accomplishments and current goals of her organization, which mobilizes rabbis, cantors and other concerned American Jews to protect human rights in North America and Israel. 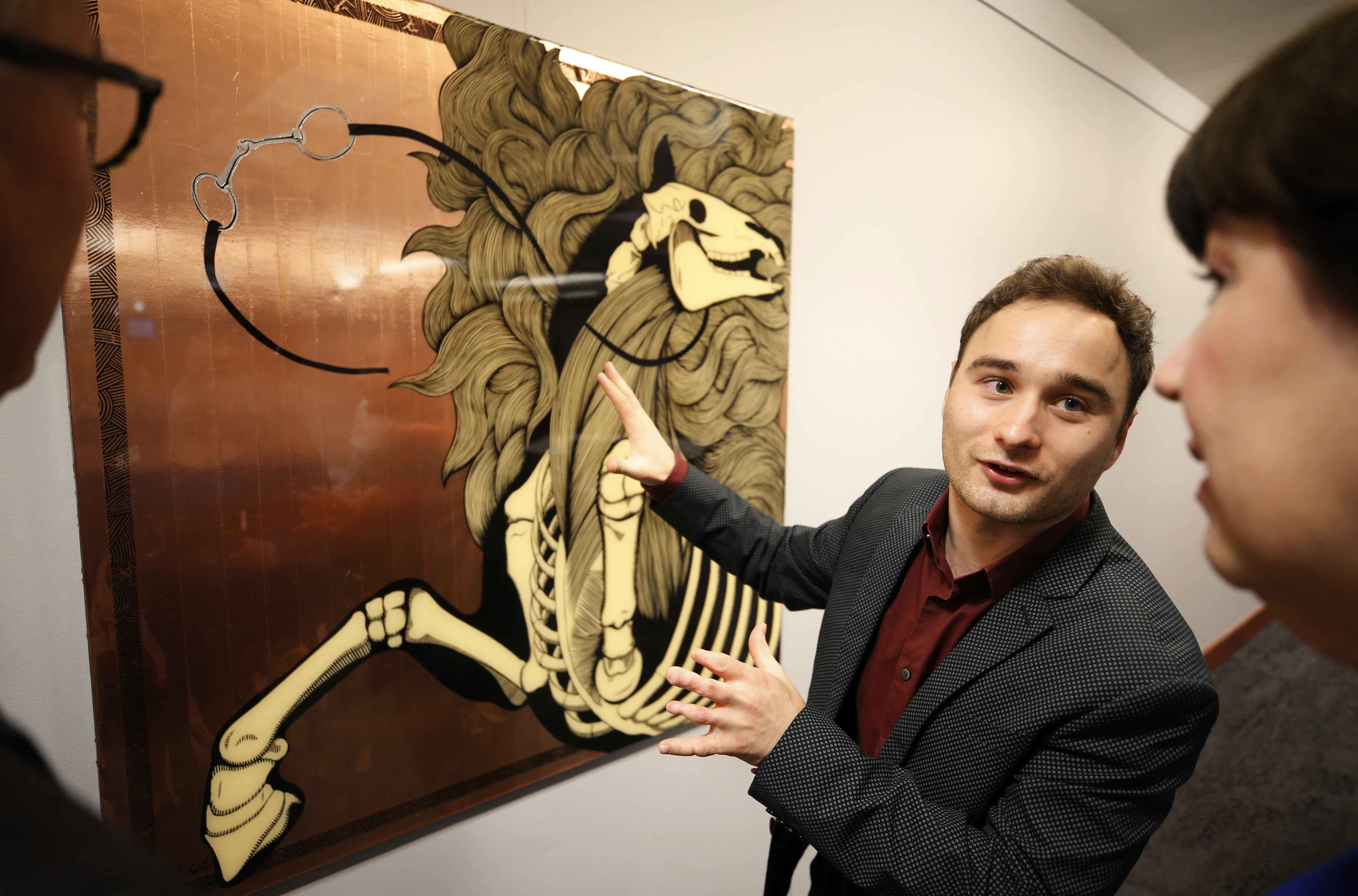 VCUarts graduate Nickolai Walko first showed his masking tape creations in the Tompkins-McCaw Library Gallery in 2015. For this second exhibit, he presented a medley of old and new work. The new pieces in the exhibit were massive in scale and presented creative reimaginings of iconic images, such as Théophile Steinlen's poster for Le Chat Noir, and classical portraiture, all with Walko’s signature pop sensibility and focus on exposed anatomy. At the opening, the VCU School of Dentistry’s in-house band, the Vertical Dimension, performed a selection of pop hits from the ’50s and ’60s.

Organized by students in GSWS (Gender, Sexuality and Women’s Studies) 391: Resistant Bodies led by Bethany Coston, Ph.D., this symposium and interactive presentation space explored actual and potential accessibility concerns on VCU’s campuses, as well as possible solutions. Some concerns pertained to physical disability, such as uneven sidewalks and buildings without elevators, while others focused on neurodivergence and spaces or situations that, for instance, could trigger anxiety. The entire VCU community, including central administration, was invited to attend in hopes of sparking change.