‌James Branch Cabell Library is the busiest academic library in the Commonwealth of Virginia. It sees more than 2 million visitors annually–most of them undergraduate students–and runs a late-hour operation to meet the needs of VCU’s diverse student population.

Cabell Library is the physical center of VCU’s urban Monroe Park Campus. The modern university—created in 1968 with the merger of the Medical College of Virginia and the Richmond Professional Institute—literally grew up around Cabell, which is situated between the VCU Student Commons and the Shafer Court Dining Center, and is flanked by an arts center, classrooms, University College and within a quick walk to historic buildings Founder’s Hall, Ginter House and others on Franklin Street and Cathedral Place. The Cathedral of the Sacred Heart is in our front yard—a shady green space. Cabell sits on "The Compass" a brick plaza that is a bustling center of VCU community life—from games playing and impromptu performances to political protests and voter registration drives.

A renovated library and 90,000 square feet new addition opened in 2015-16. Its front doors are on The Compass. Facing this major pedestrian walkway is the Cabell Screen, a 21-by-24-feet media display. 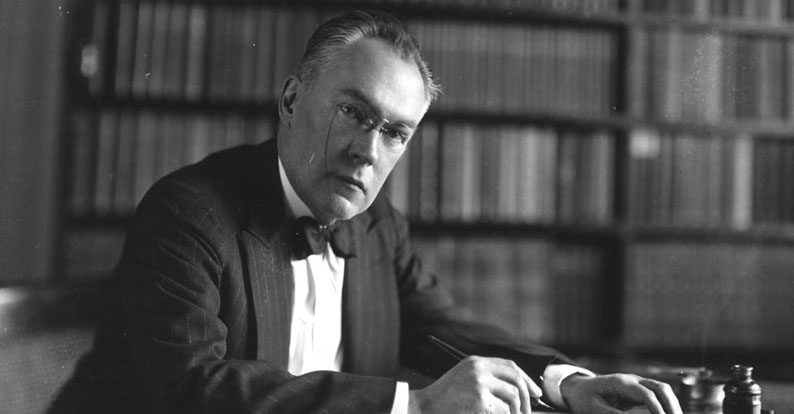 As the 1930s approached, when the realism of writers like Ernest Hemingway and John Steinbeck came into vogue, Cabell's sophisticated writing voice fell out of favor with the reading public. Cabell continued to write and by the end of his life he had authored some 52 volumes of work.

Today, some recognize Cabell as one of the first contemporary writers from the South. Like his friend and fellow Richmond writer Ellen Glasgow (1873-1945), Cabell was not afraid to satirize what he saw as the South's contradictions. Others, noting Cabell's unique blending of classic myths and legends with his own imagination, consider him a pioneer of fantasy writing. His work has been admired by a diverse group of writers, including Carl Van Vechten, Margaret Mitchell, Edmund Wilson, Robert Heinlein, and Neil Gaiman.

Soon after Virginia Commonwealth University was formed in 1968, when the Medical College of Virginia merged with Richmond Professional Institute, the University began plans for a new library for the Academic Campus. In 1970, the James Branch Cabell Library, named for one of Richmond's most respected writers, opened its doors.

Poictesme is now the name of the undergraduate student literary magazine of VCU. The magazine is produced by undergraduates from various schools and disciplines at VCU with faculty advisors from the Department of English.