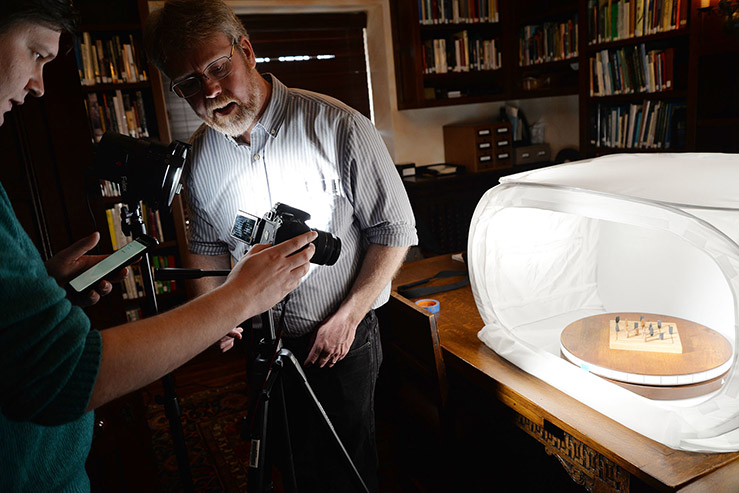 Sitting on a rotating turntable is a small wooden game called Nine Men's Morris, part of the collection of Agecroft Hall & Gardens, a historic house museum within a Tudor manor that was brought to Richmond in the 1920s piece by piece from Manchester, England.

Joshua Dow, a Virginia Commonwealth University history graduate student, is using a cellphone to operate a digital camera on a tripod, snapping a high-resolution photo each time it rotates 10 degrees. After three full rotations, Dow will have taken 108 photos, which will allow him to render — via a technique called photogrammetry — a 3D digital model of Agecroft’s game.

“I like the ways that we use technology to tell new stories and to go back and revisit and see something new from the past,” Dow said. “My goal isn’t to learn photogrammetry necessarily. It’s to digitize models and be able to use them for tours. Photogrammetry is basically a means to the end for me.”

Dow, who is interning at Agecroft Hall, is working on a project to make items in the museum’s collection more accessible through 3D scanning and photogrammetry.

The 3D digital images Dow is creating will allow visitors who are unable to climb the stairs to see pieces from Agecroft’s collection — such as the Nine Men's Morris game — that are kept on the second floor.

“Not everyone can climb our stairs when they come to visit us,” said Anne Kenny-Urban, executive director of Agecroft Hall & Gardens. “When they aren’t able to climb the stairs, we have photographs of the second floor we show them. But if we could show them [our collection] in 3D, they could see things in much more detail.”

Additionally, Dow’s 3D images will be posted online to allow anyone to check out the museum’s collection of Tudor and Stuart-era furniture, portraits and other artifacts from the 16th century.

“By putting these 3D images on the website, people will be able to get excited about [Agecroft’s collection] and we always hope that they will ultimately come and visit us and see it in person,” Kenny-Urban said. “It’s a way for them to find out more about us and what we have, because we do have such an unusual collection for the new world.”

Dow is pursuing a certificate in public history from the Department of History in the College of Humanities and Sciences. The certificate requires 15 graduate credit hours and is designed to prepare students for public history careers, such as archivists, museum curators, historical guides, historic preservationists, editors, publishers, administrators and digital media specialists.

Dow graduated from the College of William and Mary in 2013 with degrees in history and anthropology. Following graduation, he traveled to South Korea and taught English for three and a half years.

When he returned to the United States, Dow began leading tours at Agecroft Hall and took part in an archaeology field school at James Madison’s Montpelier.

At the field school, Dow met Bernard Means, Ph.D., assistant professor of anthropology in VCU’s School of World Studies and director of the Virtual Curation Laboratory, which specializes in 3D scanning and printing of historic and archaeological objects, when Means visited to 3D scan a few artifacts.

“I had been planning on applying to the [history] master’s program at VCU,” Dow said. “But then I had heard about this new public history program and I was like, ‘That’s exactly what I want to do.’”

Last fall, Dow interned in the Virtual Curation Laboratory and focused on 3D scanning items from Agecroft’s collection, both in the lab and at Agecroft with a portable scanner.

“The work that Josh has done with the Virtual Curation Laboratory through his graduate internship from VCU History adds an important third dimension to making one of Richmond’s treasures — Agecroft Hall — more accessible not only to visitors who have difficultly traversing stairs to a second floor, but [also], via 3D digital models on the internet. [It] opens Agecroft Hall to a global audience,” Means said.

This semester, Dow is focused on creating 3D images of Agecroft’s collection through photogrammetry, which essentially combines digital photographs to yield dense and precise 3D surface data. Dow has been learning the technique by working with The Workshop, which is located in James Branch Cabell Library and provides hardware, software, spaces and expertise to help the VCU community produce creative work of all kinds.

“I [scanned] some objects last semester, so this is kind of my second swing at it, just with a different technique to try to see if I can pick up things I missed,” he said.

Eric Johnson, head of innovative media at VCU Libraries, took a four-day photogrammetry seminar at the Smithsonian in 2017 that focused on creating 3D images of cultural heritage artifacts.

Last week, Dow and Johnson spent the morning at Agecroft using photogrammetry to create images of items such as the Nine Men's Morris game and a deflated ball made from a pig’s bladder.

“This is the first time I’ve had a chance to do [photogrammetry] again in-depth since that workshop,” Johnson said. “I had done a couple of test shots after I got the training, but it’s something that I would love to have us do more and more of out of The Workshop as a service to the university community.”

Dow said he thinks photogrammetry could be a useful tool for institutions like Agecroft, as the technique requires only a bit of training and easy-to-acquire equipment.

“For a lot of historical sites, they’ve already kind of accepted the utility of a high-quality camera for taking archival pictures,” he said. “If an institution wanted to, they could, with training and a couple accessories, convert a camera into a photogrammetry kit.”

Looking ahead, Dow aims to continue scanning objects in Agecroft’s collection this semester. One item in particular that he would like to render as a 3D image, he said, is a sizable, hand-carved, ornately detailed, painted bed on Agecroft’s second floor.

“It’s kind of my white whale for this project,” he said.

This article by Brian McNeill was published by University Public Affairs.